It's time for a new Oskitone synth... the Scout!

It's called the "Scout" because it's the first Oskitone synth to use a microcontroller, specifically the ATmega328 -- just like the Arduino Uno.

In addition to it being the first microcontroller-controlled instrument from Oskitone, the Scout would also make a fine introductory DIY instrument for the budding electronics hobbyist. (Some experience soldering and a general familiarity with how electricity works are recommended though!)

Like my previous work, I designed the Scout's PCB in Kicad and everything else in OpenSCAD, specifically for 3D-printing. The Scout is available assembled or as a DIY kit, with and without the 3D-printed parts; and it's fully Open Source!

This blog post is a semi-deep dive into why I made it, how it works, and its features and how they were decided. 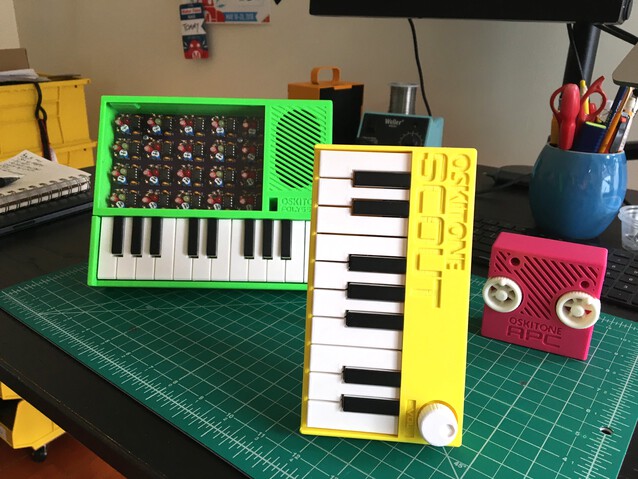 Where the POLY555 looked complex and was complex to put together, the Scout tries to do the same but at the other end of the spectrum: look simple and be simple to put together. Its target demographics are folks new to electronics, parents looking for a fun project to do with their kids, and STEAM class educators and workshoppers — all demos that I'm not currently serving well for piano-like instruments. (Which takes the APC out of the running. Sorry, APC!)

Defining that target upfront meant gleefully stripping away requirements wherever I could:

In startup parlance, the Scout is a Minimum Viable Product. I hope people like it, I hope it inspires them to play around with electronics and code and music, and I hope it will serve as a good foundation for me for future Oskitone synths.

How does it work?

All of that is reflected on the schematic: 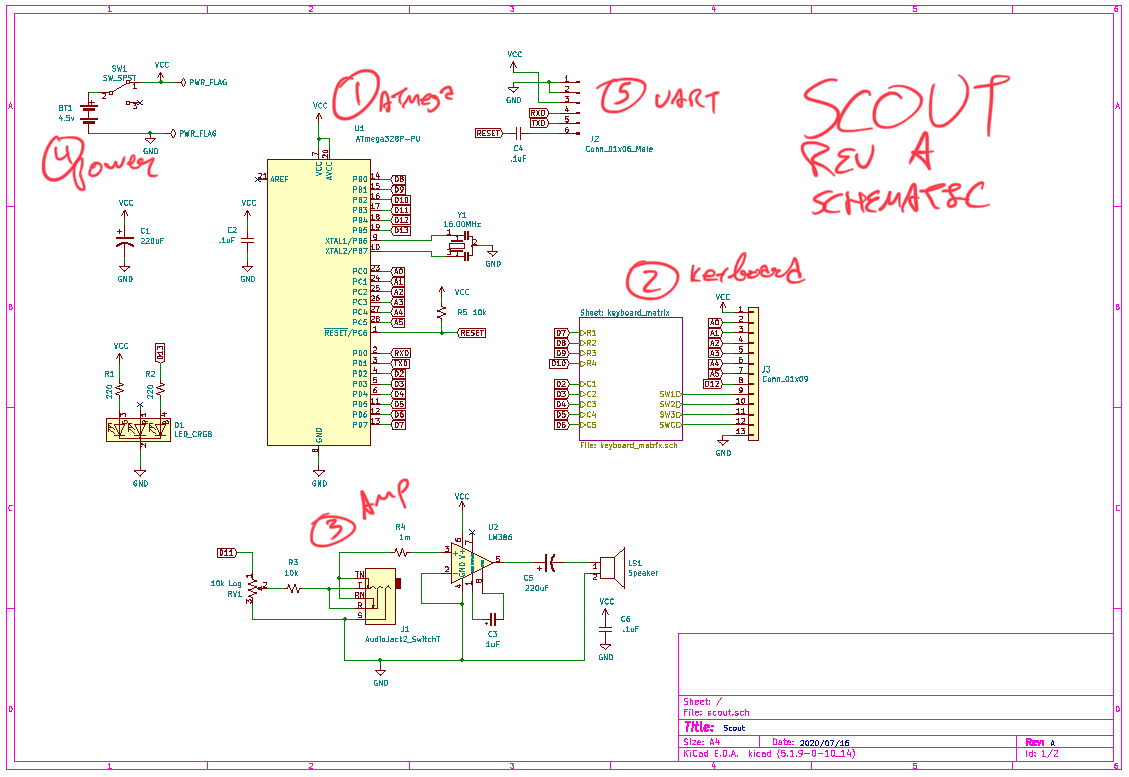 To encourage hacking, the ATmega's unused pins are pulled onto an unpopulated "HACK" header. There's one digital pin, five analog, two unused switches from the keyboard matrix, plus VCC and GND. 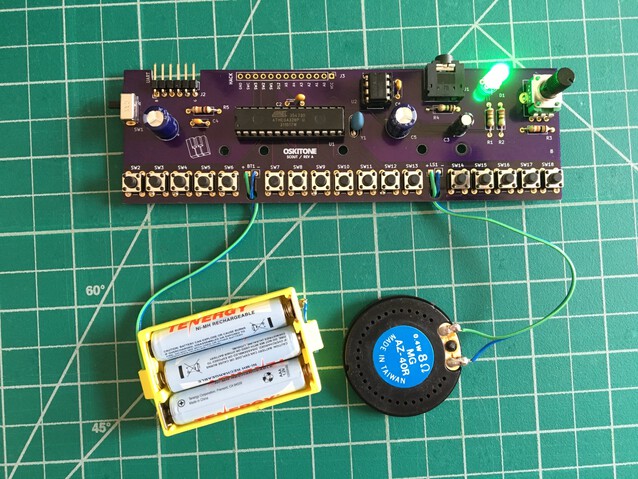 The electronics fit snuggly inside a snap-together enclosure, along with keys and some other odds and ends, all 3D-printed. 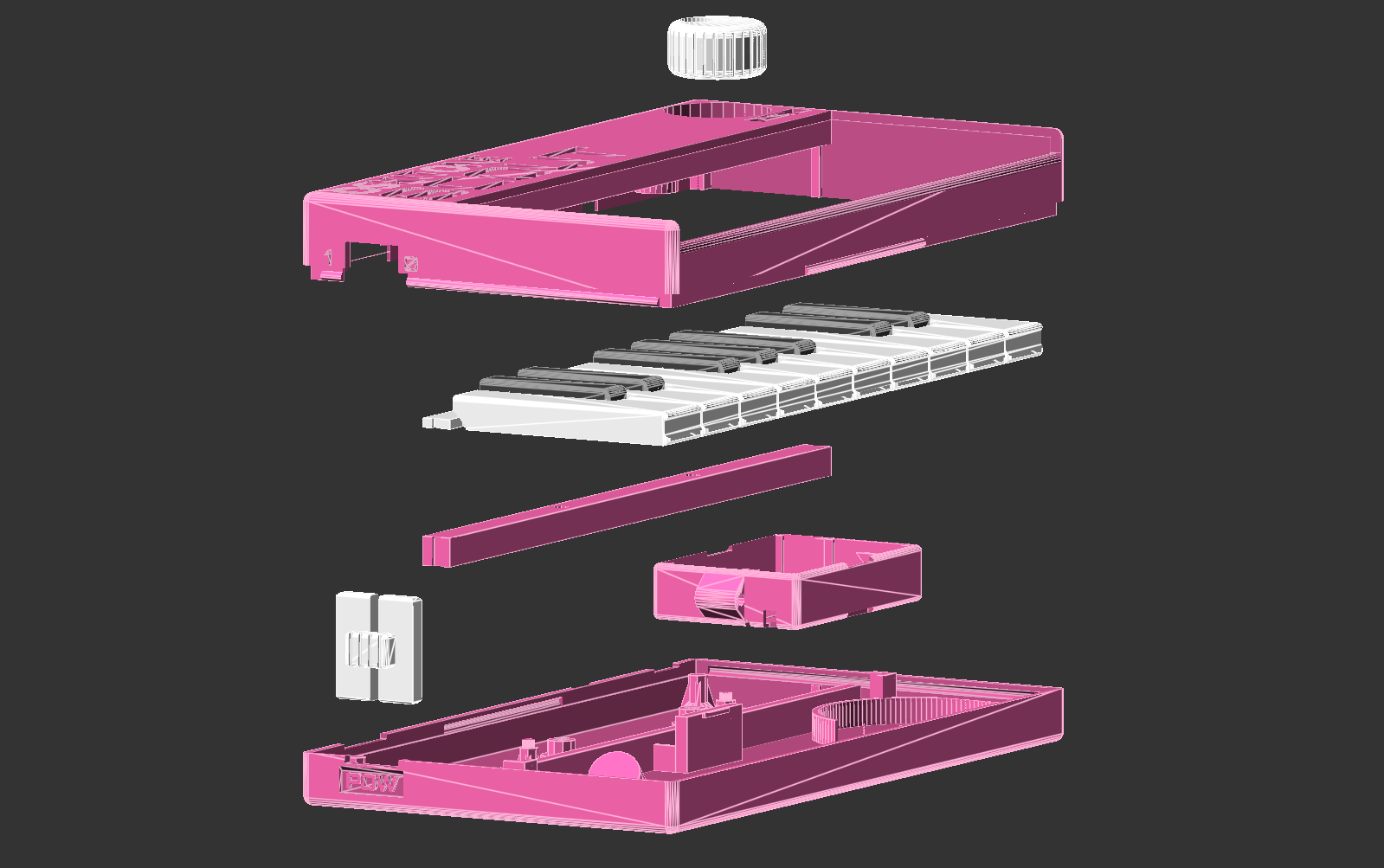 All previous Oskitone machines used 9v batteries, but 9 volts is too high for the ATmega328 and would require a regulator to bring it down, costing more BOM and space. The Scout instead uses 3 AAA batteries for power, in a custom container that clips into the enclosure. 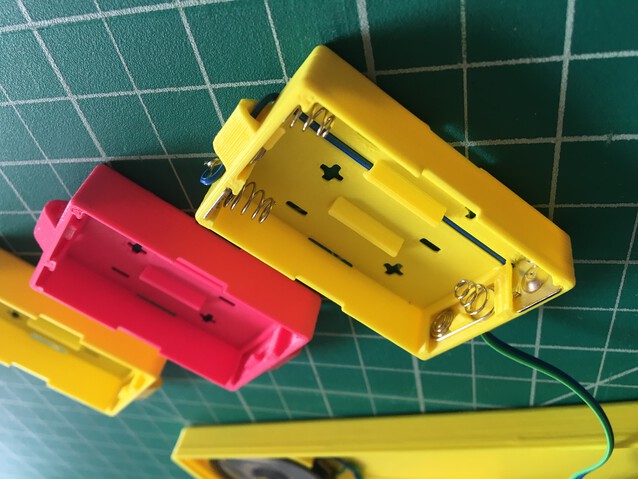 Making this was fun! I'd never paid much attention to how batteries fit into things before, but all the battery-powered devices in my house got a new level of scrutiny while I was designing the Scout's.

Sure does make me want to spin off a custom battery pack company!

(For those curious, AAA was chosen over the more typical AA for size reasons, as 3 AAs would be a little too big to fit under the keys without making them longer, which I tried but didn't like. There're also off-the-shelf battery containers that I could've used and did prototype with, but they also have size and cost caveats.) 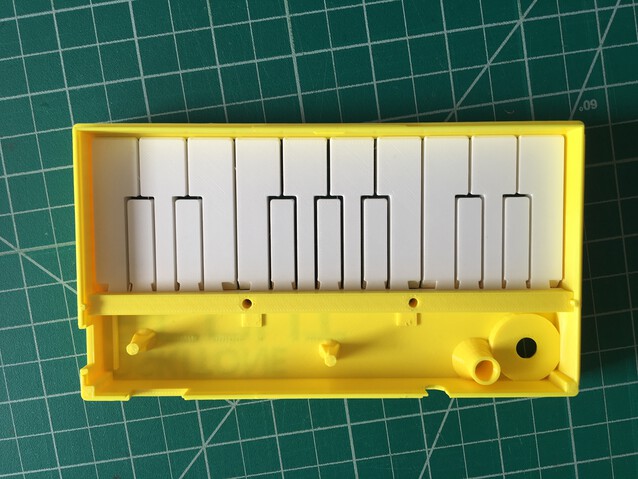 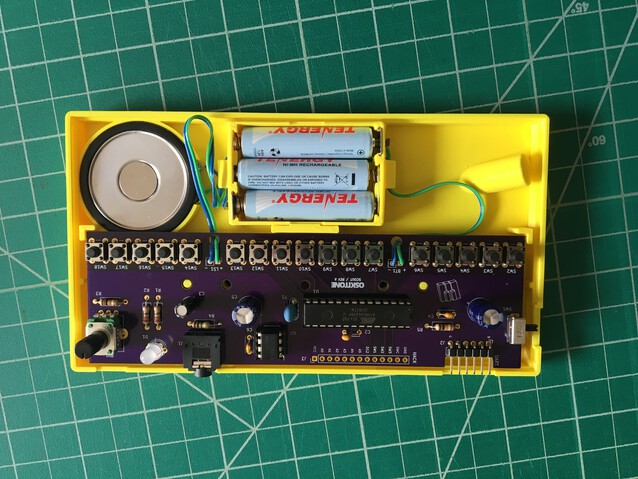 The enclosure expands on those of previous Oskitone projects, with some humble upgrades:

One of the biggest things I worked on for the Scout was how to make its enclosure assemble more easily and look better than the POLY555's but without losing any of the structural/mechanical integrity needed for the keys. It's a difficult thing to get right and hard to articulate in words, but it's funny how hands kind of intuitively know when something doesn't feel good.

The keys work the same as they did in previous instruments, and dimensions mostly match the POLY555's, despite myriad experiments. If it ain't broke, huh?

With the enclosure top off, we can get a good look at how the keys work with their switches.

Physics teacher voice: Those pieces together form a lever, allowing the user to actuate a switch with a fraction of the force that would be needed if pressing it directly. Basically, the closer the switch (the load) is to the end of the key (the fulcrum) and away from where the user presses down (the effort or force), the lower that fraction, expressed numerically in a unit called a Mechanical Advantage or MA.

A cantilever, which is a narrow bridge of material between the key block and the mounting rail, helps it to bend at the right place. 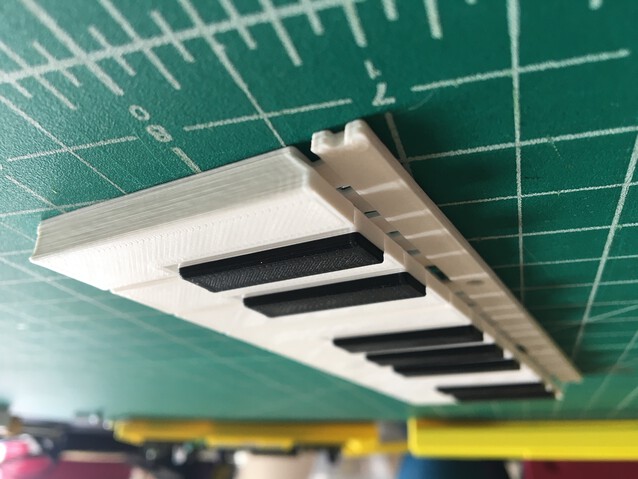 It continues to be remarkable to me how the slightest variation to this tiny little piece of plastic multiplies its effects to the user. Too thin a cantilever and the keys are loud and feel cheap. Too thick and they're silent but hard to press. Tenths of a millimeter make all the differences. Fine-tuning it is patient, patient work.

The Scout's lone control is its volume, adorned with a simple knob that's thoughtfully recessed into the enclosure and an accompanying "VOL" placard label. 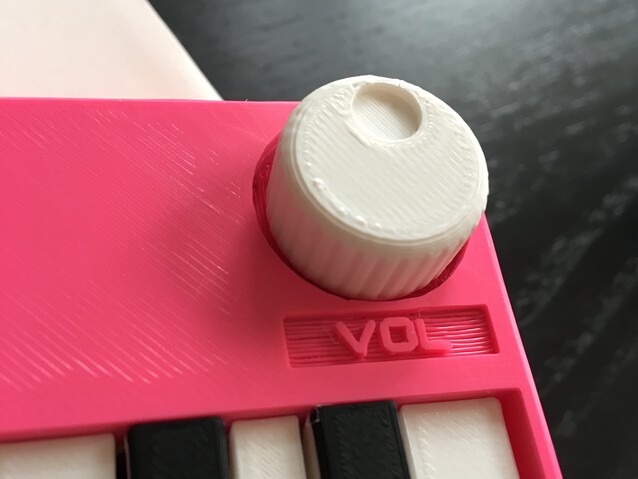 The volume knob's code is extended from the APC's wheels, ditching the spokes and subbing a brodie knob for a dimple. 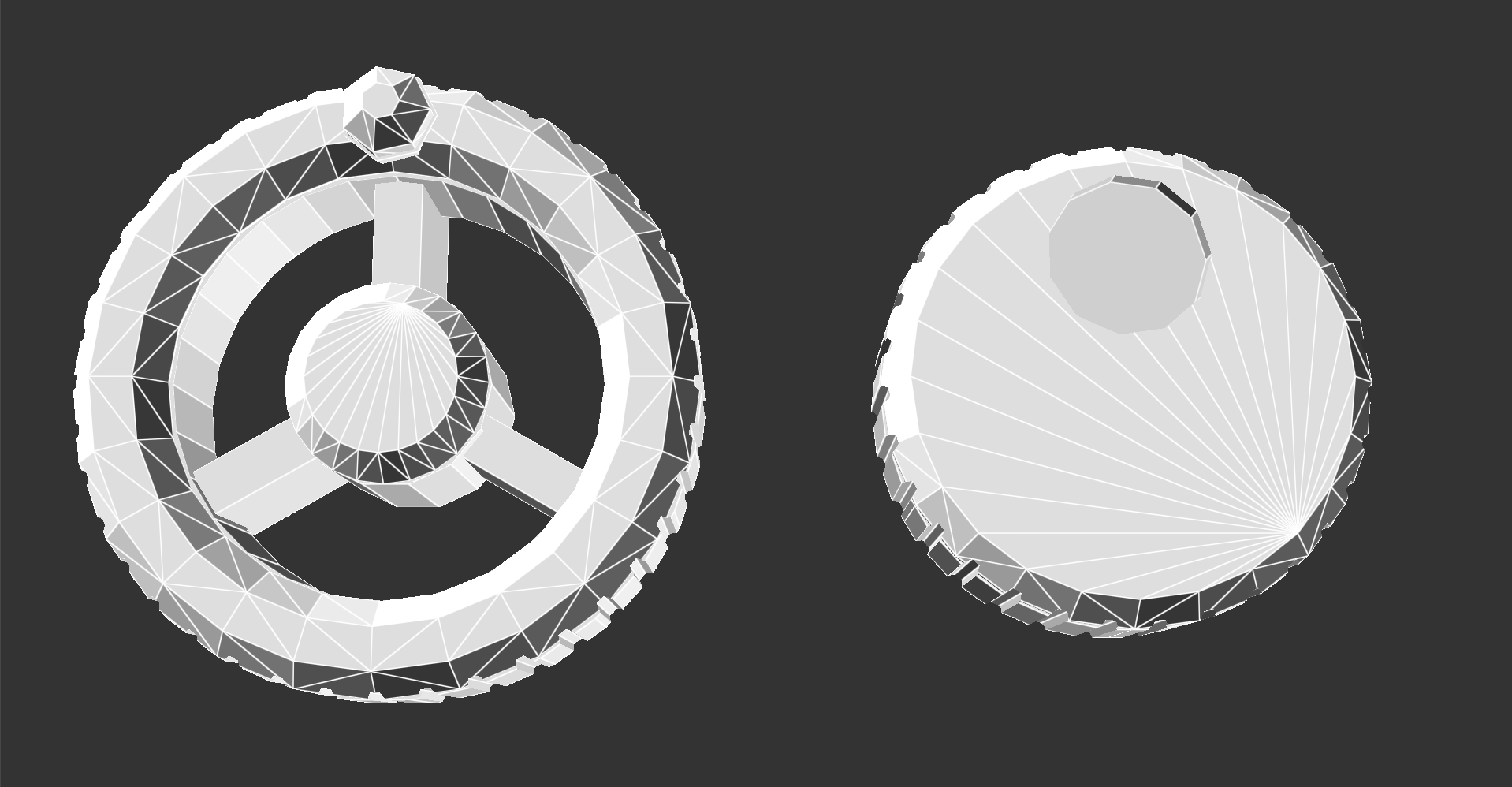 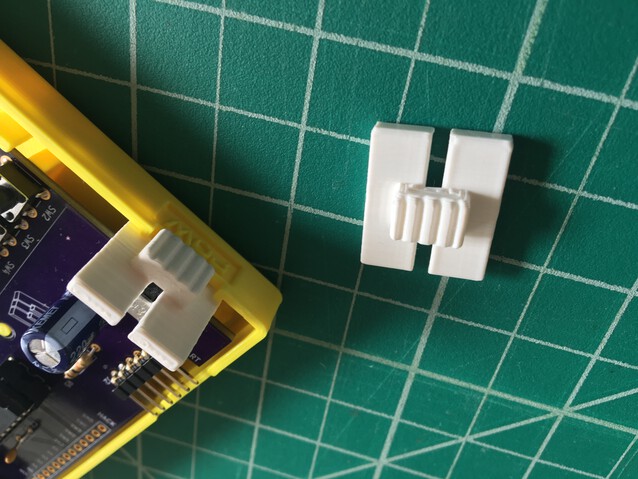 Also borrowed from the APC is the switch clutch, which straddles the on/off power switch's actuator and exposes it outside the enclosure as a cute little grip.

To aid printing, a built-in support props up the grip and snaps off when done. And to aid assembly, the piece is vertically symmetrical, so it doesn't matter which side you put in top vs bottom. 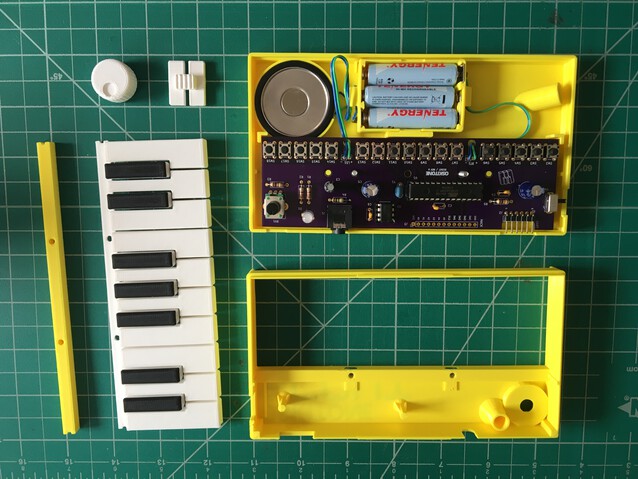 The Oskitone Scout is available now for purchase, either assembled or as a DIY electronics kit:

The DIY Kits can come with the 3D prints included, but folks with access to 3D printers are more than welcome to print their own! The Scout's 3D models are on Thingiverse: https://www.thingiverse.com/thing:4933700

All code for the Scout is Open Source and under the Creative Commons Attribution/Share-Alike license: https://github.com/oskitone/scout