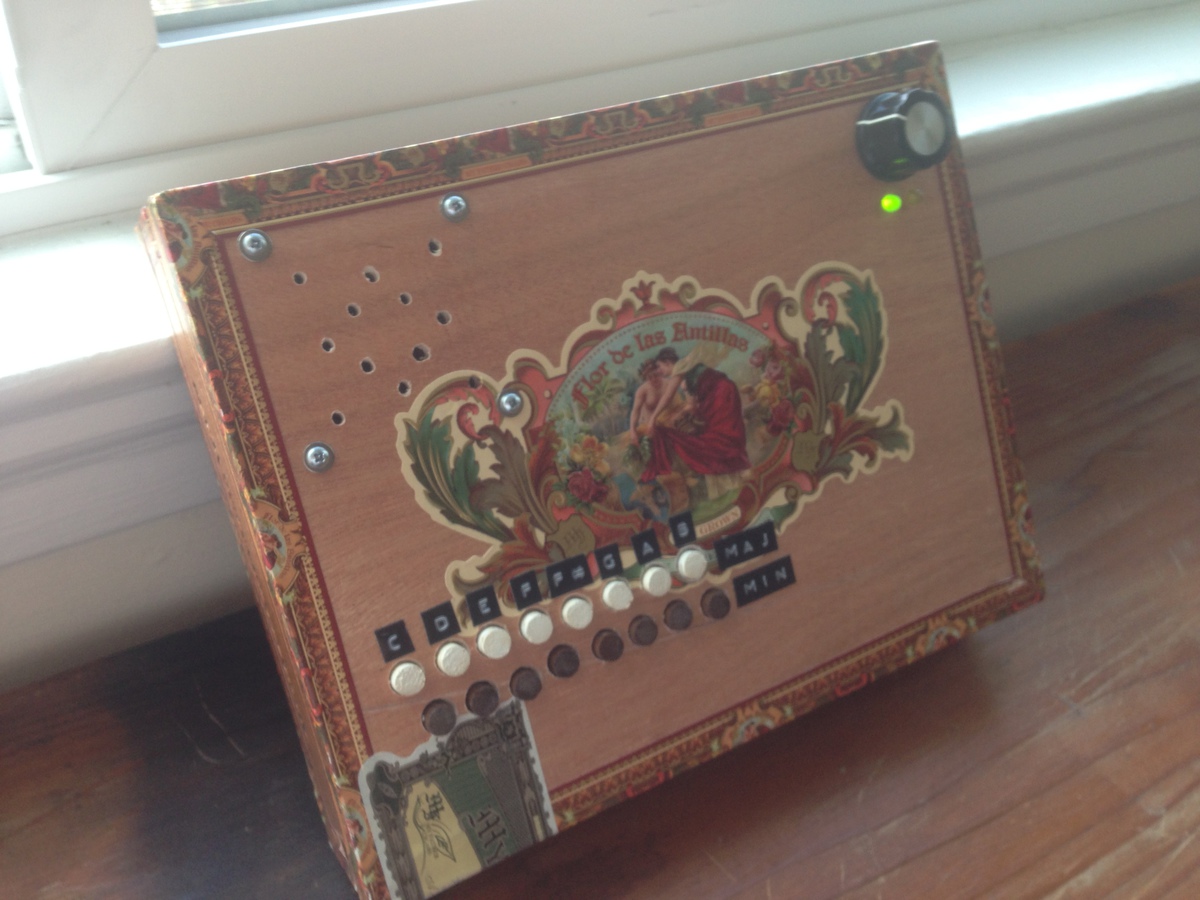 Inspired by a chord organ I had in high school, my 'chord synth' is a lo-fi analog interpretation with twelve oscillators, sixteen chords, and a wild jungle of routing jumper wires. 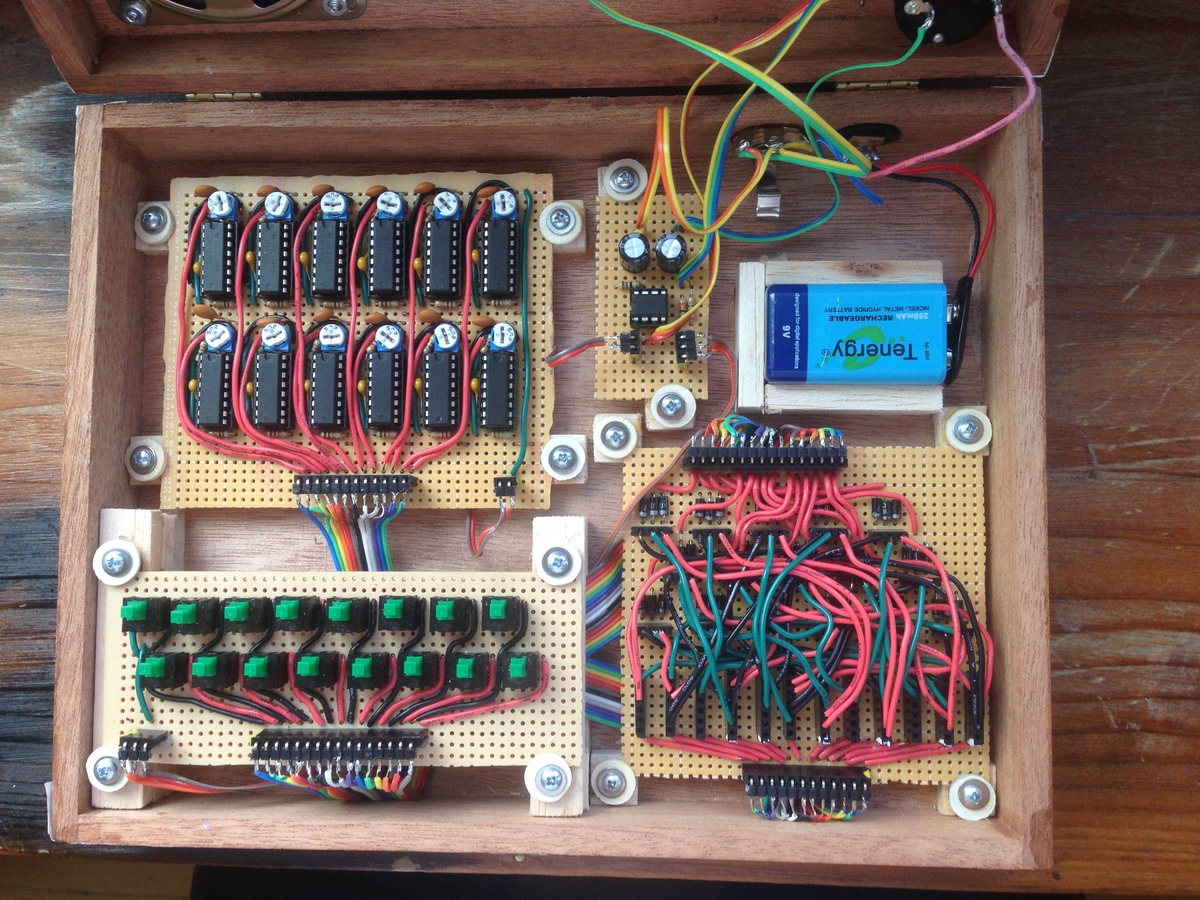 The internals try to follow the principle of single responsibility. Counter-clockwise from top-left in the photo:

Each board has input and output header pins and is connected to its siblings with ribbon cable.

Oscillation is "movement back and forth at a regular speed". In electronic circuits, that movement is of a voltage, and tuning its timing and applying it to a speaker results in an audible frequency: a note!

Why so many, instead of just one? The answer is polyphony: with one circuit per note, each can be played at the same time. Obviously, since a chord is comprised of multiple notes, a monophonic (one note at a time) solution wouldn't do. 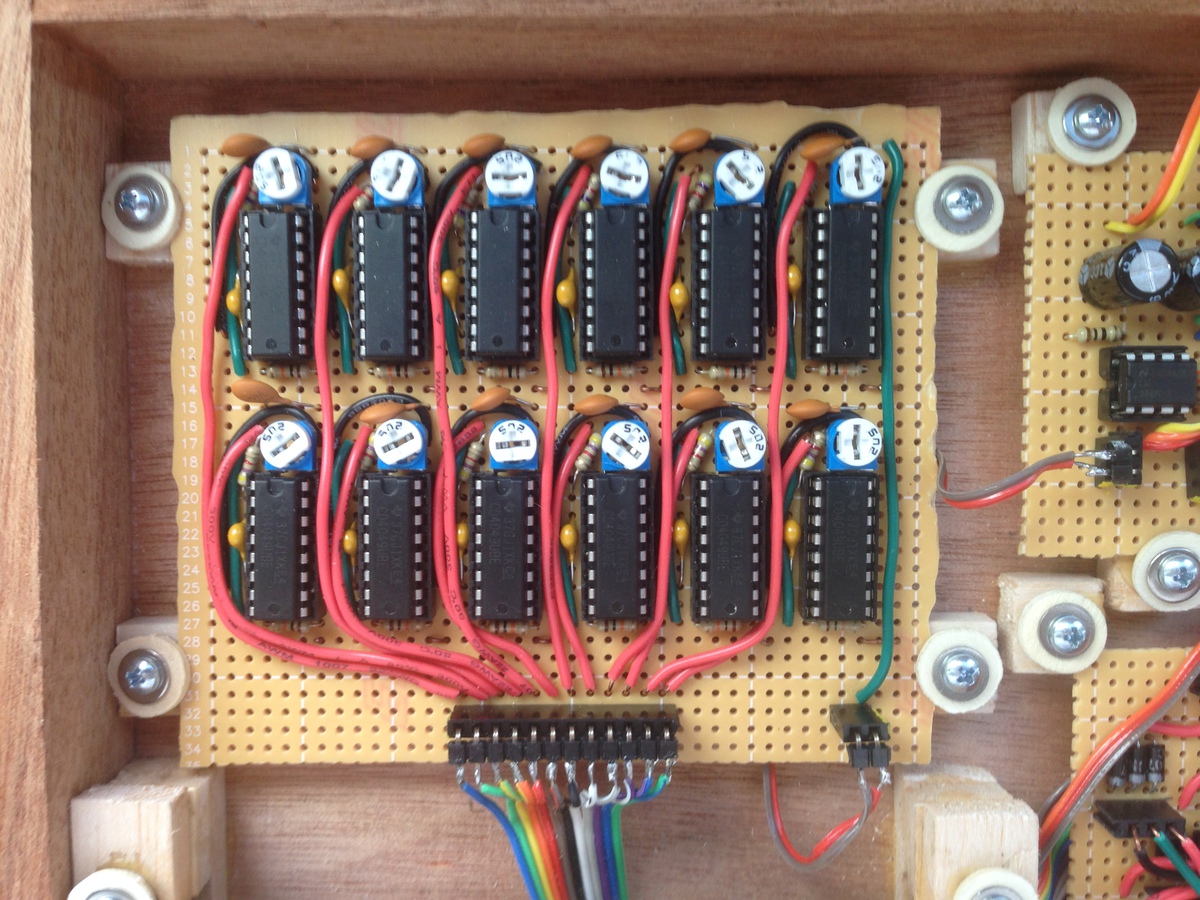 Borrowed from an 80s toy called the Magical Musical Thing, each oscillator circuit is based around a CD4049 Hex Inverter.

Like its name implies, the CD4049 has six inverting logic gates. If you give it a positive voltage (aka 1), it returns ground (aka 0); give it 0 and it returns 1. If you daisy-chain an odd number of inverters, they loop forever and make what's called a ring oscillator.

The board rigs up 12 of these:

(from left to right)

The buttons are pressed indirectly by means of overlays: cut, sanded, and painted dowels loosely fastened to the chassis by rubber band.

The twelve notes generated by the oscillator board can be exhaustively combined to play all possible chords, but for simplicity I pared the options down to just the chord progressions of the keys that I like to play in:

Musicians will object that each chord is not necessarily in root position -- the chord triad notes of root, third, and fifth will be arranged arbitrarily, depending on oscillator availability. For example, its C Major's notes go E (third), G (fifth), and then C (root).

Because satisfying the desire for each chord to always have its root be the lowest note would increase the oscillators required from 12 to 20, I found it was an easily allowable quirk of the instrument to not have "nice" chords and to instead enforce its own inversions. 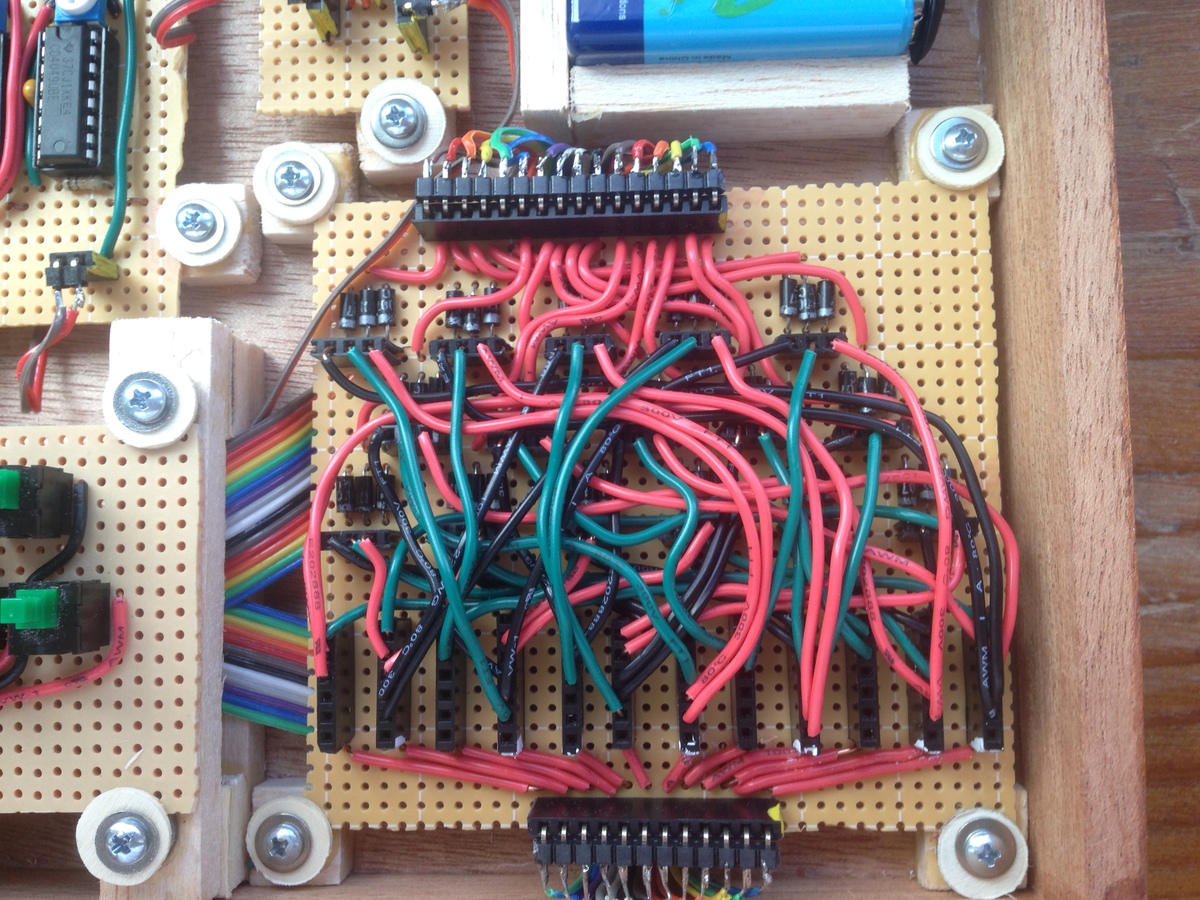 This was a crazy thing to make and looks like spaghetti, but all it really does is connect power from the buttons to the oscillators.

(from top to bottom) 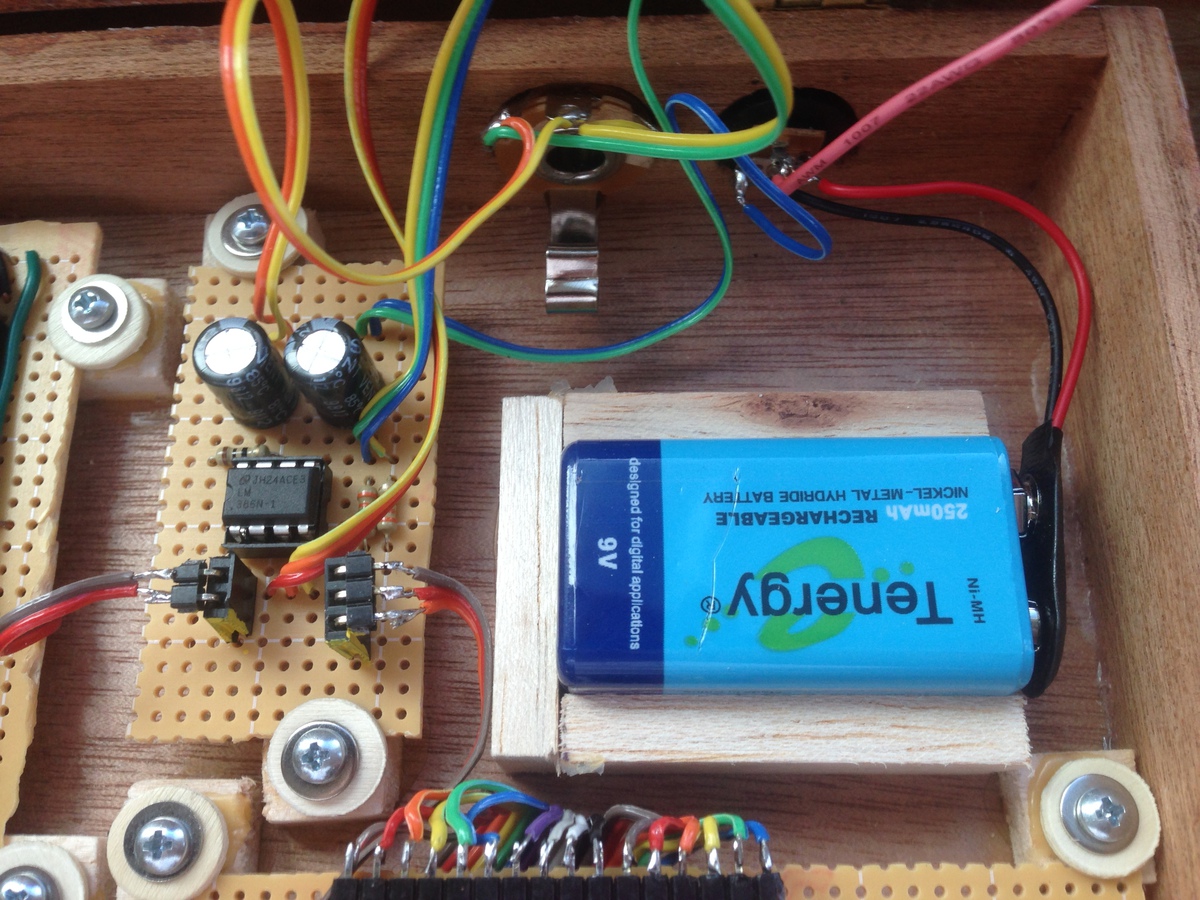 Okay, so this one isn't exactly observing the single responsibility principle, but I found it helpful to lump them all together: anything that the other boards aren't doing, this one should do. This meant that this board was the arbiter for power, ground, and anything directly attached to the chassis.

On the left, a simple LM386 amplifier makes things loud for the speaker (not pictured) or the mono 1/4" jack. When a cable's plugged into the jack, it conveniently switches off the built-in speaker.

On the right, 9 volts are supplied with the built-in battery or with a "wall wart" -- 9v is the voltage of most guitar pedals so adapters are super common.

Fastened to the lid, a 10k potentiometer with switch does double duty of setting volume and toggling power and two LEDs indicate statuses for "On" and "Playing" (from the buttons board).

(clockwise from top left; direct = connected directly to board without headers)

0:
C# was an accident. It was just the lowest note I could get with the components I had on hand.

1:
Admittedly, because I'm amplifying the summed output later, I could have had each chip serve as two oscillators. In practice, I didn't like the layout and having one chip per oscillator was a simpler mental model for me to wire up.